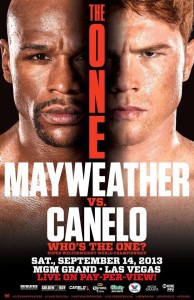 COMMENTARY | With less than a month to go before taking on Saul “Canelo” Alvarez in what could possibly be the richest fight in boxing history, Floyd Mayweather is feeling every bit the conquering hero — especially when it comes to arch-rival and frequent pound-for-pound peer Manny Pacquiao. Talking to MLive reporter David Mayo, Mayweather has apparently shut the door completely on any talks of facing Pacquiao, under any conditions.

Recently, the five-division world champ and current No. 1 pound-for-pound fighter told Yahoo! Sports that it would basically take a Pacquiao move from Top Rank Promotions to Mayweather Promotions to make the long-awaited mega-bout. In other words, for Mayweather to green-light the fight, he would have to receive some measure of business control over Manny. Realistically, none of that had much of a chance of happening. Pacquiao is signed with Top Rank until the end of 2014 and, assuming he still wants to fight after his contract is up, there’s no reason to believe that he’d be the least bit interested in leaving his current promotional team. But now, if Mayweather is to be believed this time, even that slightest hint of a possibility can be forgotten.

“Manny Pacquiao had a chance to make the fight in the past and basically, that’s the best place I’d like to leave it,” Mayweather told Mayo. “Now, I’m feeling like I wouldn’t even give him a chance. … He had a chance, he blew it, so that’s what it is.” Some would argue that Mayweather has every right to feel this way. Back in late-2009, the only time actual negotiations ever took place between the two fighters and their respective teams, it was Pacquiao who eventually killed the deal with his refusal to consider true random pre-fight blood testing. While some blamed Mayweather for introducing the idea of testing in the first place, the real burden of guilt fell on Team Pacquiao for wanting to place conditions and time restrictions on any testing done.

Without bias or prejudice, it could fairly be said that Pacquiao busted up the only real chance the bout ever had of getting made. Since then, various members of Team Pacquiao have gone on record as saying that Pacquiao would now agree to full random testing, but this willingness to agree had never manifested itself when both sides were actually talking. Everything else surrounding the Mayweather-Pacquiao fiasco has been little more than rumor, theory, and propaganda with fans spending over three years discussing a bout that was only within the realm of serious possibility for about three or four months, at best.  And, recently, Pacquiao’s fall from grace, helped along by a face-first knockout at the hands of Juan Manuel Marquez last December, has put the Filipino icon firmly in the passenger’s seat when it comes to any possible Mayweather negotiations.

With Manny opting to fight in Asia for the foreseeable future and Mayweather firmly establishing his total dominance over the American boxing scene, it’s logical to assume that the task of negotiating a Mayweather-Pacquiao fight would be much tougher than at any other point. And from the looks of things, Mayweather doesn’t even seem interested in bending an inch to try and make the fight. Meanwhile, Pacquiao continues to issue words of bravado from, literally, the other side of the world. Currently, the only way to imagine both parties resuming the three-years-dead talks is if both wind up victims to crushing defeat. Only then will a sense of humility enter into talks and some honest compromises could be made by both sides. As it stands now, though, Mayweather has the upper hand and has every right to call all the shots. And, yeah, he even has every right to completely dismiss the matchup if he so chooses.