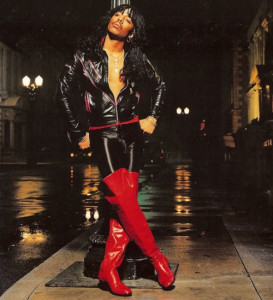 James started his singing career fronting doo-wop and rhythm and blues bands in his hometown of Buffalo, New York in the early 1960s, with his vocal style influenced by the likes of Marvin Gaye, Smokey Robinson and David Ruffin. After entering the United States Navy to avoid conscription after he dropped out of high school, James deserted and relocated to Toronto, Canada where he resumed his music career. While there, James formed the rock-soul fusion band Mynah Birds, whose lineup once included a young Neil Young. James’ tenure with the Mynah Birds was interrupted after he was discovered recording with the group in Motown in the 1960s, and surrendered to military authorities serving out a one-year sentence in a prison in Buffalo. James returned to Canada where he resumed the Mynah Birds, though the band eventually split; James relocated to California where he started a series of rock bands. He also had a period where he served as a staff writer with Motown (under an assumed name) before he left the label.

In 1977, he signed with the Gordy Records subsidiary of Motown as a recording artist where in 1978, he recorded his first album, Come Get It!, which sold over a million copies at the time of its release. He would go on to score several popular hits on the pop and R&B charts, including four number-one hits on the latter chart. James became noted not only as a hit maker on his own recordings but also produced successful recordings for the likes of Teena Marie, the Mary Jane Girls, the Temptations, Eddie Murphy and Smokey Robinson. His best-selling recording, 1981’s Street Songs, sold over three million copies helping to renew sagging fortunes in Motown.

James Ambrose Johnson, Jr. was born in Buffalo, New York to Mabel (née Gladden) and James Ambrose Johnson, Sr. Though renowned Temptations bass vocalist Melvin Franklin cited James as his nephew, that has sometimes been disputed. James’ father, an autoworker, left the family when he was around ten years old. James was one of eight children. James’ mother briefly danced for Katherine Dunham and allegedly ran errands for a Mafia-connected mob, just to feed her family. James’ early life consisted of music and, sometimes, crime. Influenced by the then popular doo-wop sound and the emerging soul musicscene, James began singing on street corners with neighborhood friends. James recounted that a school performance while on congas changed his life and he decided to become a professional musician. James would attend Orchard Park High School and Bennett High School before dropping out at 15 to avoid a possible draft due to his street criminal activity and joined the U.S. Naval Reserve. A year later, James left the Reserve after he began to miss weekend training, because it interfered with his music career.

James and Palmer soon formed a new Mynah Birds lineup with guitarists Tom Morgan and Xavier Taylor, and drummer Rick Mason. In early 1966, the Mynah Birds auditioned for the Motown label in Detroit. Morgan was unhappy with the label’s attitude towards the musicians and left, with Neil Young taking his place. With Young on board, the Mynah Birds returned to Motown to record an album, but their manager 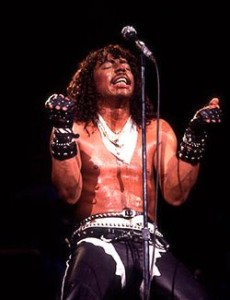 pocketed the advance money the label had given the band. The band fired their manager, who in turn told the label that James was actually a seaman who had gone AWOL. Motown told him to give himself up to the FBI, and the Mynah Birds’ album was shelved. James spent a year in a naval prison, after which he briefly returned to Toronto. During the summer of 1967, he formed a new version of the Mynah Birds (sometimes spelled “Myna Byrds”) with Neil Merryweather. The band returned to Detroit and recorded a new version of James and Neil Young’s “It’s My Time”, but the band broke up soon afterwards. During early 1968, James returned to Motown and became a songwriter and producer, writing under the assumed name “Rickie Matthews” and working with Smokey Robinson and the Miracles, Canadian band Bobby Taylor and the Vancouvers and the Spinners.

In late 1968, James and Greg Reeves moved to Los Angeles, California and formed a rock band called Salt and Pepper (under the Rick Matthews alias) with drummer Steve Rumph from T.I.M.E and Michael Rummans from the Yellow Payges. A later version consisted of Coffi Hall from Mama Lion and Merryweather and guitarist Dave Burt and Keyboardist Ed Roth from Merryweather.[2] Former Buffalo Springfield roadie Chris Sarns played bass for a while, before Ron Johnson from Kaleidoscope stepped in the following year. The group recorded a demo for Atlantic Records, and played at the Fillmore West with Jethro Tull. In 1971, James and Roth both appeared on Buffalo Springfield bassist Bruce Palmer’s solo album, The Cycle is Complete. Then they returned to Toronto, where they recorded two singles – “Big Showdown” and “Don’t You Worry” – as part of Heaven and Earth, a band that also featured guitarist Stan Endersby, bass player Denny Gerrard, and drummer Pat Little. Heaven and Earth, minus Little, then merged with another local group, Milestone, to form Great White Cane with horn players Bob Doughty and Ian Kojima, drummer Norman Wellbanks, Nickolas Balkou[disputed – discuss] on Guitar. and keyboard player John Cleveland Hughes. The group recorded an album for Lion Records in Los Angeles in March 1972, but by that summer, they had disbanded.

In 1973, A&M Records released the first Rick James single, “My Mama”, which is likely to have been recorded in Los Angeles. In 1976, James and South African guitarist Aidan Mason co-wrote “Get Up and Dance!”, which was released as a single but failed to chart. In 1977, he returned to Motown as a songwriter/producer. He soon began recording for Motown’s Gordy label, first with the Hot Lips and then with a 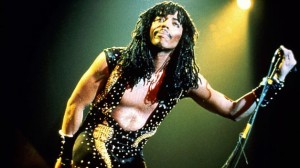 In 1978, James released his debut solo album, Come Get It!, in which he played most of the instruments on the album (as he would for his next two albums afterwards before including members of his Stone City Band to back him in the studio). The album launched his solo career, thanks to the funky disco hit, “You and I”, and the much smoother, soulful “Mary Jane”. In early 1979, he released his second album, Bustin’ Out of L Seven, which like his previous album, focused on producing a concept project. “L Seven” was named after a street on which James grew up in Buffalo. Referring to himself as “one of the baddest and best looking mother-fuckers of all time,” he followed this success with Fire It Up, and headlined his first tour in support of the album, which saw then rising former artist Prince opening for him. James’ cordial relationship with Prince coined his catchprases “THE MILKS GONE BAD!” causing the tour to become strained after Prince, according to James, stole all the biscuits from his act to hype the audience. He got so fed up with this that he canceled the rest of the tour.

After a setting fire to his fourth album, Garden of Love, in 1980, in which he traded most of his disco/funk origins for a more pop-R&B flavored project, he returned to the top with the grittier Street Songs, which was also the first to include rock and new wave elements, particularly in the album’s leading single, “Super Freak”, which became James’ biggest pop hit, reaching number-sixteen on theBillboard Hot 100 and later winning him a Grammy Award nomination. Due to this single, the follow-up top 40 smash, “Give It to Me Baby”, the Teena Marie duet “Fire and Desire”, and “Ghetto Life”,Street Songs peaked at number-one on the R&B album chart and number-three on the pop chart, going on to sell more than three million copies; this became James’ biggest-selling album and made James famous. In 1982, just as the hype from Street Songs dropped, he released the gold-selling Throwin’ Down album, and followed that up with another hit album, Cold Blooded (1983), which included the hit title track. James continued to score hits with Motown into 1985 but by the end of that year he had begun to have struggles with the label.

Following the release of The Flag in 1986, James left Motown and signed a lucrative deal with Warner Bros. Records, releasing the album, Wonderful, in 1988, which yielded the R&B hit, “Loosey’s Rap”. The video for the song was banned on MTV and BETfor sexual content, which James labeled hypocritical. After the release of the UK-only 1989 album, Kickin’, James’ recording career slowed as he struggled with personal and legal problems. In 1997, a year following his release from prison for assault charges, James released his first new album in eight years, Urban Rapsody. Though James returned to live performances to promote the album, he stopped performing for a while after suffering a stroke following a show in Denver in 1998. Prior to the concert, James was interviewed on VH-1’s Behind the Music, where he openly talked about his life and career and also mentioned his drug use, which he said was behind him.

During James’ Motown heyday in the late seventies and early eighties, James found himself in demand and was asked to produce Teena Marie’s long-awaited debut album. James originally had planned to produce a full album for Diana Ross but when Motown told him they only wanted four songs from James, he gave the songs up to Marie, including the duet, “I’m a Sucker for Your Love”, for her debut album, Wild and Peaceful. The album launched not only Marie’s career but a personal and professional relationship between James and Marie, which continued until James’ death. In 1982, he was asked to produce a song for the Temptations’ upcoming album, Reunion, after former members Eddie Kendricks and David Ruffin returned to the group for their ill-fated reunion. The song, “Standing on the Top”, became a top ten R&B hit and James was credited in the song not only as a writer but as a duet singer, as well. 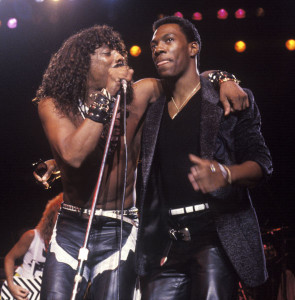 In 1983, he collaborated with longtime idol Smokey Robinson on their hit song, “Ebony Eyes”, which became a top 30 hit on the R&B charts. That same year, he produced his longtime background vocal group the Mary Jane Girls, with their self-titled debut album, featuring the hits “All Night Long” and “Candy Man”. The Mary Jane Girls originally consisted of Joanne “JoJo” McDuffie (lead/background vocals) and longtime session singers Julia Waters and Maxine Waters. The trio had long sung with James, who later included Kimberly “Maxi” Wuletich, Candice “Candi” Ghant and Cheryl Bailey (who used the stage name Cheri Wells) to join the group, though they didn’t sing on the original records. After Wells left, she was replaced by Yvette “Corvette” Marine. In 1985, the group’s second album, Only Four You included their biggest hit, “In My House: “JoJo” continued to sing lead and contributed to the backgrounds with the Water Sisters, as the other group members could not sing at all or were extremely limited vocally. Rick’s band sang for the group with JoJo for concert tours. James also produced a couple of albums for his Stone City Band, releasing material by the group in 1980 and 1982 respectively. Also in 1985, James produced and wrote the Eddie Murphyhit “Party All the Time”; he also sang on the track. Following James’ descent into drug abuse and his exit from Motown, the Stone City Band and the Mary Jane Girls both dissolved in 1987. Both groups reunited following James’ release from prison in 1996.
<iframe width=”560″ height=”315″ src=”//www.youtube.com/embed/kCFZsInE5V8″ frameborder=”0″ allowfullscreen></iframe>