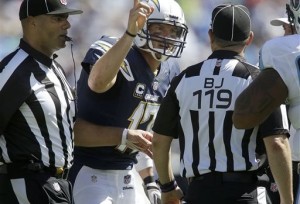 Most people that know me know that I am an avid Dallas Cowboys fan.  I am also a fan of football on all levels.  I chose to wait and write this piece after all the dust settles and the Monday morning quarterbacks, sports columnist and sports commentators all get their digs in on the Sa n Diego Chargers.  Over the past years, I now feel that I have been too harsh of a critic on Phillip Rivers.  I have said the Chargers will not win a Super Bowl as long as he was the quarterback.  After Sundays game against the Titans, I was driving with my girlfriend talking about the game.  I said that the Chargers look like the Bad News Bears, especially after that game of “Hot Potato” at the end.  The Chargers blew another game after starting off looking like contenders. My girlfriend reminded me that the Bad News Bears were a group of Misfit kids all thrown together like a pot of gumbo, trying to play baseball as a team.  The term misfits hit and stuck with me and turned on the rational light in my head.

The San Diego Chargers seem have a knack for taking a good team or a great player and delivering him to other NFL franchises to live out their greatness and glory.  It all started for me when they had a player who went by the simple letter “JJ” John Jefferson.  JJ came into the league and delivered some of the most spectacular circus catches I had ever seen in the game of football.  He did them game after game, always one better than the other, at critical times during the game.  When he tried to renegotiate his contract, the then owner Gene Klein, decided to trade JJ to Green Bay (a place where players were sent out to 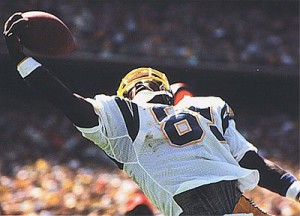 pasture and oblivion in the 80’s) instead of paying him a salary he would have been worth.  San Diego fans were not happy with the trade because they finally had a talented exciting Pro Bowl caliber receiver they haven’t seen since the days of “Bambi”.  At that time Don “Air” Coryell was in the midst of redefining the passing game in the NFL and San Diego fans felt that loosing JJ would be the end of an era that never took off.  Fortunately the Chargers were able to land Wes Chandler from the New Orleans Saints and the chargers didn’t miss a beat.  Air Coryell was born and enters the new era of the forward pass in the NFL.

After a disappointing lost to the Bengals in the championship game in 1981 in the Freezer Bowl, the Chargers began to make a name for themselves in the NFL.  That’s where things seem to go bad in San Diego. It seems when a San Diego team begin to show greatness and a player emerges as a standout in the league, the San Diego Franchises (Padres included) seems to dismantle what made them a winner, trade great players and legends to other teams (Dave Winfield to the Yankees) and try to bring in no name athletes, or athletes past their prime and try to FIT them into the mix.  It doesn’t work.  Hence the term Misfits.  It’s like working on a puzzle all day and getting down to a few pieces to make it all complete, then deciding to scramble the pieces and staring over, with new pieces that don’t fit.  That is the San Diego motto.  San Diego has had great athletes like Drew Breez, Ladanian Tomlinson, Jr. Seau, Rodney Harrison and many others, on great teams during their time.  Instead of going out and adding the missing piece to the puzzle, the Chargers front office trade them all away and hope their decision to focus on salaries, will work out.  They might as well grab a pair of dice and head to the craps table in Vegas.

Most storied franchises have always seemed to be the ones that have shown loyalty to their fans by keeping their star players and teams together, then bring in pieces that help make the puzzle complete.  Doing so keeps the fans loyal because they just bought a $200 jersey with a star players name and number on it and they can wear it for life, instead of watching a game with that players name and number on another team.  The owners and GM’s seem to think the game of football revolves around them and their clever choice of trades, draft picks and acquisitions.  They do have a hand in building a team but in the long run, it is the coaches and players that make a championship team.  It is a combination of good talent, the chemistry of the players that know one another skills and can depend on that teammate to do what they should do. That’s what makes a championship team. That’s what brings fans to the stadium.  The Franchises that have had dynasties (Green Bay Packers, Dallas Cowboys, San Francisco 49ers, Pittsburg Steelers, New England Patriots, Boston Celtics, Los Angeles Lakers, New York Yankees) have all had the same identifiable players and coaches during their era of greatness, with some 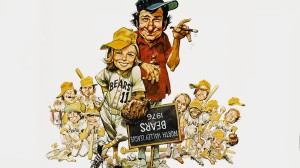 franchises having more than one era of champions.  I could not recognize or name half of the defensive players on the field for the Chargers in Sunday’s Game.

I can no longer place the Chargers lack of championships on Phillip Rivers or any one player.  It stems from the top and those that call themselves businessmen that feel they are the reason the league and sports exist.  You are not.  Just sign the checks and let the fans, coaches and players have their game.  Stop building the Bad News Bears and a Band of Misfits over and over again.