When Australian-born Olivia Newton-John first embarked on a career in entertainment, she never could have guessed that she’d become someone we’d grow up with, hold onto, and pass along to our children. Yet, her timeless portrayal of Sandy in Grease and her catalog of singable (and danceable) hits have made her a permanent fixture in pop culture. She’s acted and sang with the best, she’s won her battles against breast cancer, she’s reinvented herself, and, through it all, she’s done more than survive… she’s thrived. Now Olivia Newton-John in Vegas with her “Summer Nights” show. She takes up residency at Las Vegas’ Flamingo beginning Tuesday, April 8, where she’ll be performing all of her beloved hits and “having a blast.” Below Newton-John talks about her Vegas show, Grease, her health struggles and John Travolta.

This April, you’ll begin a residency at Flamingo Las Vegas. What appealed to you about doing an extended Vegas run?
I have always loved Vegas and have had a lot of fun there with my family and friends. I think my first show there was back in the early ’70s when I opened for Charlie Rich. I am really looking forward to the shows at the Flamingo because I really love the room. I went to see Donny and Marie a few months ago (I will be sharing the room with them when they are not in Vegas) and, I really loved the old Vegas feel. It will also give me a chance to be in one place and let my fans from all over the world have the chance to come see me.

What can fans expect from these shows?
It’s really going to be a journey through my music and career. From my early country hits to songs from Grease and Xanadu to “Physical” and my other pop hits — as well as some of my newer healing music — which is very important to me today as my life seems to revolve around health and wellness. I am also thrilled that the Flamingo will donate a portion of every ticket sold to the Olivia Newton-John Cancer and Wellness Centre in Melbourne, Australia. 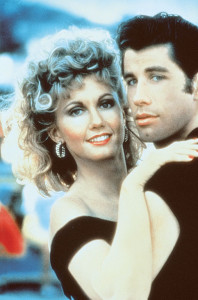 Grease is still one of the most beloved films of all time. Why do you think that movie is so timelessly appealing, even to current and future generations who are seeing it for the first time?
I think the look, feel, colors and music are the reason for the movie being so timeless. I love that at my live concerts, I have girls and boys who are 4 or 5 years old who know the music from the movie, and that they are there enjoying it just as much as their grandparents do! It was a very special time for all of us.

You’ve taken on a wide variety of sporadic film and TV roles since Grease over the years. These days, what excites you enough to get in front of a camera?
Honestly, I have been very lucky to have worked with so many wonderful actors, directors and producers. Today it is really about what is fun and what I think I will enjoy doing. Life is too short to not enjoy what you do and I have had some really wonderful experiences. I mean really, I was able to dance on film with both John Travolta and Gene Kelly (in Xanadu). It really doesn’t get much better than that! Playing myself in GLEE opposite Jane Lynch a few years ago was pretty fun too!
[Editor’s note: Xanadu due usually airs on Encore and MoviePlex so check your On Demand offerings. For linear TV watchers, we do see it airing on May 5 at 5:25am and 3:40pm ET on MoviePlex]

How did your personal and family health struggles lead to the formation of The Olivia Newton-John Cancer & Wellness Centre?
I was diagnosed with breast cancer in 1992 and I am happy to say that today, 22 years later, I am a cancer “thriver!”  When the Austin reached out to me about lending my name to a new Cancer Centre on their hospital grounds I spoke to my mum and she said in her German accent: “Dah-ling, if by doing this you can help someone, than you should do it.” It was very important to me that if I did lend my name that they have a designated Wellness Centre on the grounds, as well. I was fortunate enough during my own cancer journey to have access to alternative therapies such as meditation, acupuncture and massage and, it was important to me to have these available for anyone at the ONJCWC. When healing we need to heal the whole person — body, mind and spirit.

What was it like to reunite with John Travolta a couple of years ago to record your Christmas album?
Working on This Christmas with John was a lot of fun. It was actually pretty unexpected as it started when we called each other one Christmas morning and someone mentioned that “You’re The One That I Want” was named the #1 duet of all time. From that we decided to do a Christmas song and donate all of the money to charity. The project kept growing and before we knew it, we had some great collaborations with Barbra Streisand, Tony Bennett, Cliff Richard and James Taylor, among others. We really had fun!

EXTRA: Where to get tickets for Olivia Newton-John’s “Summer Nights” show in Vegas You can purchase tickets to  Olivia Newton-John’s “Summer Nights” show directly through the Flamingo using the above link. Ticket prices start at $69 a seat. Performances are at 7:30pm Tuesdays, Wednesdays, Thursdays, Fridays and Saturdays. For more information you can also call 855-234-7469 or 702-777-2782.