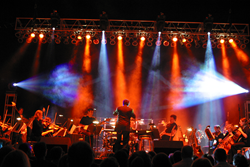 The Music of Queen

The Toledo Symphony performs the Music of Queen in a special Key Bank Pops concert on March 15th at the Stranahan (8PM). This innovative 50-piece orchestra plus live rock band show features "Bohemian Rhapsody," "Somebody to Love," "We Are the Champions," and many more of Queen’s greatest hits.

Amplified by a full rock band and accompanied by singer Brody Dolyniuk, creator Brent Havens guest conducts the ensemble as they capture Queen’s signature 70’s sound surrounded by the Toledo Symphony Orchestra in a concert rich with melodies and lush harmonies.

Tickets are on sale now through the Toledo Symphony box office at 419-246-8000 or visiting ToledoSymphony.com.

Media sponsor for this event is Toledo.com.

Interviews with the creator of the show are available upon request.

Brody Dolyniuk remembers mimicking voices even as a child, listening to old records and tapes. He is a gifted, self-taught musician, capable of playing several instruments, with a particular knack for capturing the voices and mannerisms of classic characters from music, TV, and movies.

His first professional gigs were at piano bars in several U.S. cities, where he learned to charm audiences and expand his musical repertoire. With a longing to perform the music of the many rock bands that inspired him, Brody assembled Yellow Brick Road, unquestionably Las Vegas’ most successful classic rock band. Since 1997, YBR has been reshaping the casino entertainment scene by bringing a rock concert atmosphere to showrooms previously reserved for Top-40-style lounge acts. Along the way, Brody has made numerous radio and TV appearances, and earned a spot in the finals of two national singing competitions, and even self-produced several large rock production-style shows utilizing multimedia, lasers, comedy and special effects.

As a devout classic rock/Queen fan, Brody’s enthusiasm, vocal ability and on-stage energy were the ideal fit for The Music of Queen show.