Home > Entertainment > The night that changedEVERYTHING 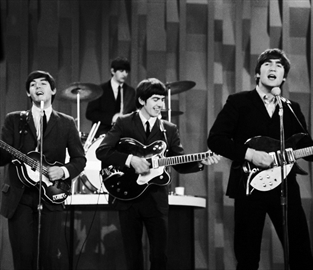 If you were a grown-up on Feb. 9, 1964, and within reach of a television set, you might well have tuned to CBS to watch The Ed Sullivan Show. After all, the competition was Walt Disney’s Wonderful World of Color on NBC and a short-lived Western on ABC called The Travels of Jaimie McPheeters.

Besides, maybe you were curious about this new singing group that was creating such a furor. Or maybe your kids were making you.

Because if you were under 18, old enough to know the difference and not facing some sort of reprehensible and totally unfair punishment from your parents, you almost certainly did tune in to see the American television debut of the Beatles.

The Fab Four had arrived in New York just two days earlier to complete their incredibly rapid conquest of America. Virtually unknown in this country before the Dec. 26, 1963, release of I Want to Hold Your Hand, the Beatles flew in on the wings of that No. 1 single, along with the No. 1 album Meet the Beatles and a wave of teenage admiration that was quickly coined Beatlemania.

Sure, America had seen its young people fall for pop stars before. Frank Sinatra made the girls swoon in the 1940s and Elvis Presley did it in the 1950s, but Beatlemania coincided neatly with the baby boom, giving it demographic clout that its predecessor fads couldn’t muster.

In 1964, the last boomers were being hatched and the first ones were turning 18, and the Beatles’ first appearance on The Ed Sullivan Show was when the cohort showed the remarkable power of its remarkable numbers.

More than 70 million people watched the Feb. 9 episode, making it the most-watched television show to that date. A second performance a week later rolled in at No. 2. Those are all the more impressive when we consider that most of the people who were dying to watch the Beatles didn’t have control of the family TV.

A trip to America certainly was inevitable for the Beatles, but it was Sullivan who first brought the group over for his popular Sunday variety show. A former journalist who had started his New York-based series in 1948 as The Toast of the Town, Sullivan had a keen eye for talent and kept his show on top — it was a top 10 series even without the Beatles — by out-competing other variety shows for the biggest names.

Sullivan also had a history of booking rock ‘n’ roll acts, despite a personal distaste for the music. He brought on Elvis in 1956 after The Steve Allen Show racked up huge ratings with the young rocker. Elvis’ appearance with Sullivan drew nearly 60 million viewers, and thereafter Sullivan occasionally found a spot for the likes of Buddy Holly or Roy Orbison.

He had had a personal experience with Beatlemania during a visit to England in October 1963, when he saw 1,500 kids waiting in the rain at Heathrow Airport for John, Paul, George and Ringo to return from a tour of Sweden. So when Beatles manager Brian Epstein showed up a couple of weeks later in New York, Sullivan was open to the idea of booking the Liverpool lads.

A number of legends have grown up around the Feb. 9 appearance. The most well-known says that juvenile crime all but disappeared in America that night — a "fact" that has never been substantiated.

We do know that George Harrison had strep throat and remained at the Plaza hotel during rehearsals. Road manager Neil Aspinwall sat in on guitar as the rest of the Beatles tried out the set Sullivan’s people built for them.

According to Beatles biographer Philip Norman, Epstein approached Sullivan and said, "I would like to know the exact wording of your introduction."

"I would like you to get lost," Sullivan responded.

The show itself went more smoothly. Sullivan introduced them prosaically, his last words drowned out by the screams from the audience. The Beatles launched into their latest single, All My Loving, and history was in progress. During the second number, Till There Was You, captions identified each of the Beatles by first name. Under John Lennon’s was added, "Sorry, girls. He’s married."

They did five numbers in all; three in the first half of the show and two in the second. A week later, after a stop in Washington, D.C., for their first American concert, the Beatles were in Miami Beach to join Sullivan’s annual snowbird episode. Despite the spectacular showing of the previous week, they had to share top billing with Mitzi Gaynor.

The Beatles made a third appearance Feb. 23, although it had been taped Feb. 9 and the boys already were back in the U.K.

The Beatles and the baby boomers combined to completely reshape the music business, but to a lesser extent they made an impact on television, too.

Before that, most rock ‘n’ roll could be found on TV outside of network prime time, on Dick’s Clark’s afternoon show American Bandstand or on a handful of syndicated or regional shows.

But the Beatles proved that prime time could no longer consider rock ‘n’ roll a minor annoyance tolerated to provide a little entertainment for the kids. With the mammoth baby boomer audience clamouring for their music, rock ‘n’ roll acts became essential for prime-time variety shows.

Throughout the 1960s, it became standard for rock acts to do cameo spots on scripted shows, too: Chad & Jeremy on The Patty Duke Show, Davie Allan and the Arrows on Get Smart, the Beau Brummels on The Flintstones, the Seeds on The Mothers-in-Law, Buffalo Springfield on Mannix.

Shindig! debuted Sept. 16, 1964, with Sam Cooke and the Righteous Brothers as headliners and was an instant success. It was joined by NBC’s knockoff, Hullabaloo, in January.

The day of the rock ‘n’ roll variety show didn’t last long — both shows were cancelled in 1966. But rock ‘n’ roll continued to be a staple on prime time.

The Monkees came to life in 1966, a show meant to be a weekly American version of the successful Beatles movies A Hard Day’s Night and Help! featuring a quartet put together by the producers.

And even though variety shows aimed solely at the teen audience did not thrive, the standard variety series continued to do well, with producers routinely booking acts that previously had been looked on as novelties or too edgy for prime time.

The Doors appeared on Sullivan’s show in 1967 — and angered the host by not changing the lyric "you know we couldn’t get much higher" after promising they would. The Jefferson Airplane played Sullivan and The Smothers Brothers Comedy Hour, as did the Who, smashing their instruments on the latter.

It was a relationship that would last until the variety show died in the late 1970s. MTV launched in 1981 and pop music again moved to the outskirts of television, to be brought back in force, but in different form, by the young contestants of American Idol. 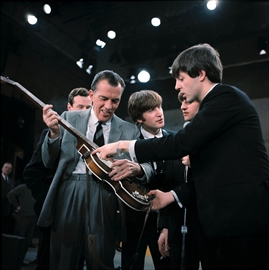 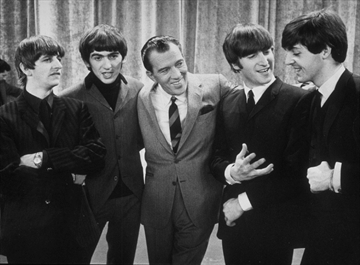 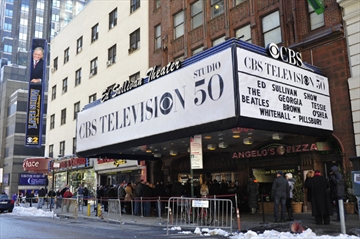