Yet somehow Elijah Wood manages to do just that in this weekend’s limited release "Grand Piano," a "cinematic thriller about a pianist held at gunpoint whilst playing a piano," as Wood described it to us earlier this week when we spoke to him at the W Hotel in Hollywood.

Wood plays Tom Selznick, "a brilliant pianist who has developed stage fright, and we meet him the first time he’s played the piano in front of an audience in five years." But stage fright turns out to be the least of his worries.

As if Wood didn’t have enough worries, we decided to try to stump him with one of our POPsessions questionnaires, because you don’t really know someone until you know what they like.

What was the first movie you remember seeing?
"Mary Poppins" is an early memory, but honestly, the movies that stick out in my mind are like "Gremlins" and a horror movie called "Truth or Dare?: A Critical Madness," that I saw when I was five or six years old.

It’s funny, the horror movies always stick out.
The thing is, my brother’s seven years older than me, so he would rent movies with his friends, and often the movies that they were drawn to were horror films. And he’d let me see those movies, unbeknownst to my mom. 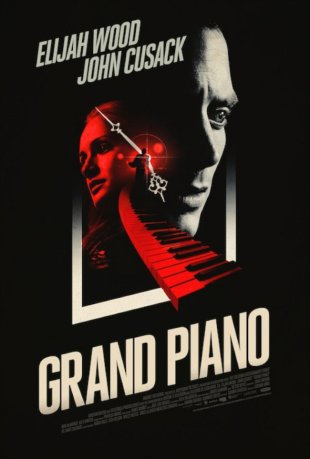 What movie do you absolutely positively always stop and watch when you see it on cable?
"Groundhog Day," which is apropos, considering the recent passing of Harold Ramis. That’s a movie that, if it’s on, I’m watching it. And I’ve seen it countless times, which is perfect, considering the movie is a loop and it’s about repetition. But man, it’s a perfect film.

And you know, it’s one of those things: The character that Bill Murray plays repeats himself over and over again and gets to know the details so that he can repeat those details back, and in a way that’s kind of what re-watching the movie is like. You just start to acquire more and more and remember more and more details. It’s great. It’s a wonderful, wonderful film.

What movie do you absolutely positively always stop and watch when you see it on cable? See what I did there?
Nice. Nice. It’s hilarious because in a way I thought it was a slightly different question, to which I was going to say "The Hot Spot." I was going to give you a different answer, but cable specifically. Have you ever seen "The Hot Spot" with Don Johnson and Jennifer Connolly? It’s a sort of noir style film. That’s another one, man. That’s, like, late night style. Jennifer Connolly is so beautiful in it.

Who is your TV crush?
Growing up it was Elizabeth Montgomery, the girl in "Bewitched." I’m just thinking about my childhood. Like, what did I see when I was really young? It was "Bewitched." It was all, like, Nickelodeon, Nick at Night stuff. "Gilligan’s Island," you know? So, like, Ginger and Mary Ann, I thought they were really hot.

Which one, if you had to choose?
F—. I’m going to say it’s Mary Ann then, but Ginger had a…she was super hot and sultry too, but Mary Ann had that girl next door short shorts. She kind of…she straddled both lines. It was perfect.

[Relataed: POPsessions: Why Shailene Woodley Will Never Get in an Elevator with Darth Vader ]

What movie makes you cry every time?
"E.T." I think "E.T." is singlehandedly …I cry relatively easy watching movies … there’s just something about the way that it … you know, with the music, and the imagery, and the emotion within the context of a scene, it can draw emotion out of you so perfectly. It’s like science.

But "E.T.," I think, has the distinction of the movie that has made me cry the most in my life. I’d never seen it on the big screen until a year ago, or two years ago, and they played it at the Sitges Film Festival in Spain, and it was a 2K print. It was beautiful, and I’d seen the movie a million times, but f— me, dude. Like, I have never been so devastated by a movie. It just wrecked me. I felt physically exhausted at the end of the film … Just a sobbing mess. It was amazing. It’s a masterpiece.

If you were kidnapped, what movie or TV character would you call to save you? And you can say Samwise Gamgee.
Nice. For some reason I immediately thought of Dexter. I don’t know why. Because he could really take care of that situation in a pretty gnarly way.

That’s a good stance.
F— yeah. So, I don’t have any guilty pleasures. I don’t watch any reality programming, but I do love "Top Chef." "Top Chef" is great. I haven’t seen this season, but I’m a foodie, so I’m drawn to that show, and I used to watch … I suppose this would be considered the more guilty pleasure, but I used to watch "The Biggest Loser." I f—ing love the s— out of it. Got totally wrapped up in it. You know, it’s very emotional. What these people put their bodies through and … what they go through emotionally is really intense. I just got f—ing sucked in.

I like that you’re proud about it.
Yeah. Totally proud.

What was the first concert that you went to?
It was the Smashing Pumpkins and Garbage in 1997 … Garbage was supporting their first album, and the Pumpkins were supporting "Melancholy and Infinite Sadness," and it was at the Forum here in LA.

Beatles or Rolling Stones?
Beatles, 100 percent. I loved The Rolling Stones, like, first. Well, first couple albums were great. They’re really good, but there’s, like, four of five albums that are incredible, and that legacy, you can never take that away, but … The Beatles have a catalogue that’s pretty perfect. They’re also different sensibilities, you know? The Rolling Stones are a blues-based rock ‘n’ roll band, and The Beatles are a lot more than that. There’s just a lot more going on. Their initial sensibilities are far more rooted in pop music than they are in rock ‘n’ roll, in the kind of bluesier side. Yeah … I was always more of a Beatles fan, but, you know, not to at all discount the achievements of The Rolling Stones.

Do you have a theme song?
No. No. I don’t think I do have a theme song either. I mean, "Good Vibrations" is the sort of song that resonates a lot with me. Problem is, I listen to so much music. It’s hard for one song or one artist to encapsulate everything, but the Beach Boys are pretty damn good at it.

"Good Vibrations" resonates?
It’s pretty perfect. "Surf’s Up" is … "Surf’s Up" would be a good f—ing funeral song, man. "Surf’s Up" by the Beach Boys is great.

Well, I’m glad that we had a chance to figure this out.
Me too.