There’s a brilliant story told about a chance encounter Pierce Brosnan had on ‘Mamma Mia!’, the hit Abba musical of 2008. One of the film’s stars, Dominic Cooper, recounted a version of it recently on the Graham Norton show.

The story goes that, while the team were busy recording the ‘Waterloo’ finale – in which Abba’s best-known hit is crowbarred-in with a full-on stage dance sequence featuring tight jumpsuits with sparkly bits – they were moving between soundstages at Pinewood Studios, in full costume.

There was another film shooting at Pinewood at the time – ‘Quantum of Solace’, Daniel Craig’s second outing as 007. Brosnan, Stellan Skarsgard and Colin Firth rounded a corner and ran into Craig, in one of his trademarked Tom Ford suits. Brosnan, twinkling in his bright blue jumpsuit (with frilly golden cuffs), quipped, “You can laugh, but this is you in a few years.”

So when Yahoo Movies caught up with Brosnan, the star of this weekend’s ‘A Long Way Down’, we couldn’t resist finding out if the story is true. Over the phone from Paris, he burst into laughter. “It’s become kind of legend, that story,” he admitted. “But it’s not true! As I minced my way down the squeaky corridors of Pinewood with Stellan and Colin, I said, ‘All I need now is to bump into Dan Craig’ – me in my jumpsuit and tights. But I never met Daniel, fortunately.” 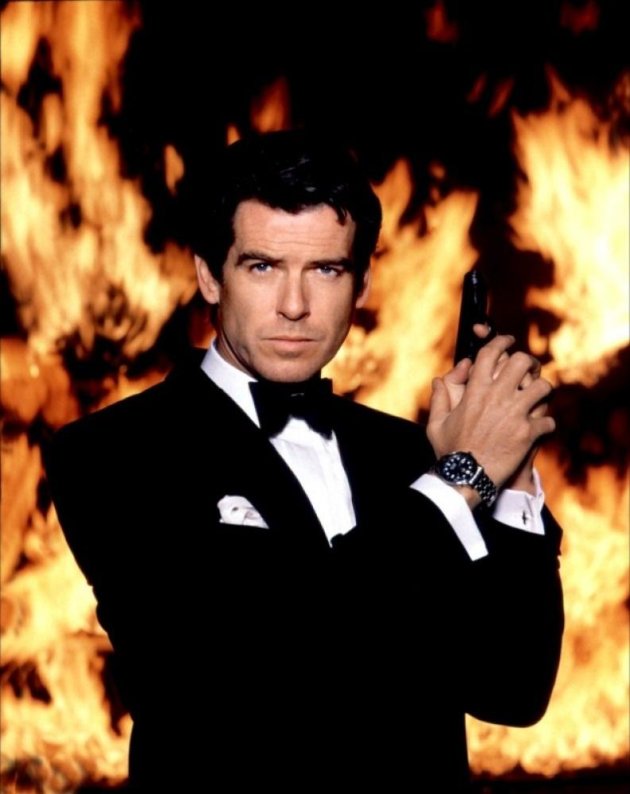 Still, you can put the spy in a sequined jumpsuit, but you can’t take the spy out of the man. Brosnan told us that he’s ready to get back into action, and that he’s just wrapped a new film in which he plays a CIA spy. “’November Man’ is a project I’ve had with my production company Irish Dreamtime for about five years,” Brosnan revealed, adding that he felt “very comfortable” picking up a gun once again.

The story follows Brosnan’s ex-CIA operative who finds himself up against his former student in a deadly post-Cold War conflict involving high-level CIA officials and the Russian president-elect. Could Brosnan be plotting a late-career return to action like fellow Irishman Liam Neeson?

“I think there’s been enough space and time between me and Bond, and enough room on the stage for me to quietly come in there and do something in that arena again,” he said. “It was something that had been talked about for a long time. ”He promises the film will be out “before you know it”.

There’s little room for espionage and intrigue in Brosnan’s current project. Based on the Nick Hornby book, ‘A Long Way Down’ tells the story of four lost souls who meet at a popular suicide hotspot on New Year’s Eve, and talk each other away from the ledge. Brosnan plays a disgraced TV presenter who’s ready to end it all, and the actor says the character is an amalgam of the many breakfast TV hosts he’s come across.

“There were a few reference points,” he explains. “One guy in particular I honed in on, because I thought he was very entertaining. I know him and I’ve been on his show – with him and his partner – and so I just brought the enthusiasm of him to my character.”

He didn’t name any names when we spoke to him – how many husband-and-wife TV presenters can you think of? – but the film’s press materials reveal that Richard Madeley – of Richard & Judy fame – was Brosnan’s inspiration.

Suicide isn’t a usual topic for comedy, and Brosnan admits thinking about it was “an awful place to go in your imagination as an actor”. But he was impressed by Jack Thorne’s adaptation, and Horby’s book, and how it handled the issue sensitively.

The key to the process, he said, was a strong bond he formed with his co-stars, Aaron Paul, Toni Collette and Imogen Poots. In a high-wattage selfie, they were pictured on Paul’s twitter feed at a Radiohead concert together. “There was a great fondness between the four of us,” Brosnan said. “We had breakfast, lunch and dinner together and that was the nature of the beast.”

‘A Long Way Down’ is out in cinemas today.