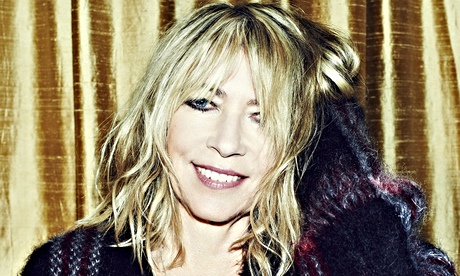 Kim Gordon
‘There are times when you lose your narrative or get tired of it. Then it takes a while to figure out what the new one is’: Kim Gordon shot at the Rookery EC1. Hair and makeup by Dina Catchpole. Photograph: Jason Hetherington for the Observer

Last autumn, Kim Gordon held a retrospective exhibition of her visual art at the New York gallery White Columns. One project, Noise Painting, featured the names of experimental rock bands written in thick, dripping black paint. Most of them hung on the wall, as you’d expect, but one was scrunched up on the floor as if it had been torn down in a rage. That one said Sonic Youth. You don’t have to be an art critic to appreciate the symbolism.

For 30 years Gordon played bass, sang and wrote songs in Sonic Youth, one of the most important and inspirational bands of their generation, and for 27 of those she was married to lead guitarist and frontman Thurston Moore. Their survival was encouraging confirmation that you could remain both artistically uncompromising and domestically content deep into middle age. All around them bands crumpled and friends imploded (including Nirvana, who supported Sonic Youth on their 1991 European tour), but Gordon and Moore appeared as solid as their music was tempestuous: Paul Newman and Joanne Woodward with feedback.

So it came as a genuine shock to fans when, in October 2011, the couple announced that they were divorcing. Sonic Youth slogged grimly through their remaining concert commitments before calling it quits. Gordon says that terminal tour was "horrible", but declines, with a polite tone yet pained expression, to discuss the divorce. "It’s very hard because whatever gets said, even the most minimal thing, gets repeated on the internet and then brought up in every interview," she explains, stirring honey into her tea in a quiet hotel drawing room.

She regrets divulging certain details last year – an affair with a younger woman, an incriminating text message, a bitter split – and her reticence is certainly understandable, but the divorce is the elephant in the room. It’s not that it’s relevant to her visual art or the intense, improvisational music she’s making in her new duo Body/Head, but it is, to a large extent, the catalyst for these endeavours – the reason why, at 60, she is entering an unexpected new phase of her life.

One positive outcome has been the enormous goodwill from fans. Detached from Sonic Youth, Gordon has been venerated anew as an icon of New York cool, an influence on grunge and Riot Grrrl and a modest polymath who paints, writes, designs clothes and acts: recently she appeared in HBO’s Girls as a prickly rehab patient.

Kim Gordon: ‘In rock music there are certain assumptions that it makes people more enlightened and it really doesn’t’ Photograph: Jason Hetherington for the Observer

Gordon complains, however, that magazines like to present women like her in a certain manner. "You can’t be a strong or cool woman and be represented except in a harsh way, looking mean and cold and hard. It’s like reverse sexism. They don’t want to show a picture of you smiling because it’s not good for their editorial." So let the record state that she laughs often but has a subdued, melancholy air. "I don’t really feel comfortable anywhere except when I’m working alone at home," she says. "It’s exhausting to be out around people."

In Sonic Youth, especially during their brush with the mainstream in the early 1990s, Gordon seemed dauntingly impressive and self-assured, but she laughs when I tell her that. "People just project things on to you. I was always pretty insecure about my image and where I fitted in. It was really when I started going to England because the English press could be super-mean and kind of petty." Oh dear. "That was the first place where people started asking what it’s like being a girl in a band. I really didn’t think about it because I grew up being sort of a tomboy."

Gordon was born in Rochester, New York, in 1953 but raised in Los Angeles, where her father was a professor at the University of California. Her parents, she says, "weren’t quite bohemian because they grew up in the Depression and security was an issue for them, but they were unconventional – true individuals". She attended a progressive school and lived in a house full of culture. "I never thought about doing anything other than making art."

She’s writing a memoir (excellent working title: Girl in a Band) and she’s had difficulties confirming certain childhood memories because her parents are dead and her brother is a paranoid schizophrenic. "He actually has a good memory, but it’s hard to talk to him. It’s scary when you realise what you forget."

After studying at the Otis Art Institute, she moved to New York in 1979 to become an artist. She loved the city and, after 20 years in Massachusetts, she’s currently wondering whether she can face moving back, but the early 1980s New York art scene, to her dismay, was maddened by a sudden influx of big money. "It was a really crazy time. I think the artists were freaked out." While artists started acting like rock stars, the rock bands were behaving like artists. When Gordon saw thorny No Wave groups such as DNA and Mars, she realised that music could be a more rewarding outlet. Was Sonic Youth an art project in the form of a rock group?

"Well, kind of. Because I was thinking about male bonding and male sexuality as premises for artforms. At one point I thought I didn’t just want to be a voyeur. I wanted to be in the middle of it."

Formed in 1981, Sonic Youth were the perfect amalgam of melody, intellect and noise. They could write catchy rock songs and epic, avant-garde maelstroms that made you marvel anew at the potential of the electric guitar, and when you bought a new album or attended a show you were never sure what combination you were going to get. In 1985 the New York Times credited them with "making the most startlingly original guitar-based music since Jimi Hendrix".

By the end of the 1980s Gordon had become a role model to younger musicians, especially women. Did she think of herself as a mentor? "Oh God no! Truthfully, I only feel now that I should be doing that. I didn’t think of myself as having any authority or position. I just didn’t see myself as being influential, I guess." My surprise is so visible that it makes her laugh. 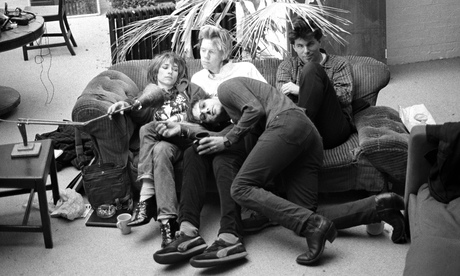 ‘I was thinking about male sexuality as premises for artforms. But I didn’t just want to be a voyeur; I wanted to be in the middle of it’: Gordon (left) with Sonic Youth in 1984. Photograph: Peter Noble/Redferns

She was significant partly by default. Indie-rock may have been politically progressive, but it was overwhelmingly male apart from Gordon and another shyer-than-she-seemed bass-player named Kim: Kim Deal of the Pixies. Perhaps it was generational, too. Gordon was older when Sonic Youth started than Kurt Cobain was when he died and she must have seemed unusually wise to the early 1990s generation. She helped a lot of young talent get noticed. She co-produced the first album by Courtney Love’s band Hole, gave director Spike Jonze his start in music videos and was supportive of Riot Grrrl. Kathleen Hanna of Bikini Kill recently said: "Kim made me feel accepted in a way I hadn’t before."

When Sonic Youth signed to Geffen Records after 1988’s alt-rock landmark Daydream Nation, Gordon’s lyrics became more explicitly feminist in songs such as "Kool Thing", "Tunic (Song for Karen)" and "Swimsuit Issue", which she wrote after discovering that one Geffen executive was being sued for sexual harassment. "I guess I had an authority problem," she says. "In rock music people have certain assumptions that it makes people more enlightened and it really doesn’t. It was the same thing playing for Neil Young’s audience [in 1991] and being reminded that hippies can be really narrow-minded. We were around people who felt like, ‘We’re groovy, we’re cool,’ but they were so sexist. It was just in your face all the time. I was looking for subject matter, and I thought: ‘If I’m a woman, I can write about all these things. I don’t have to write a love song.’"

Does she think the industry’s any better now? "I feel like it’s two steps forward, one step back. Are women using their sexuality to sell records because they’re empowered? In which case yeah, great. But with some women it’s almost inbred and there’s pressure of competitiveness: who can be the sexiest? Male executives don’t have to say anything because women know. And it’s all aesthetically pleasing but it gets a little boring after a while if that’s the only side that gets promoted."

Gordon believes her life would have changed somewhat even without the divorce. Sonic Youth, she thinks, "would have ended fairly soon. When you do something for so long it’s nice to stop." And her daughter, Coco, recently left home to study art in Chicago. "I feel like I’m playing catch-up in a way. I was raising a daughter. Somebody has to stay home. You can’t just go off and do other things."

Does that mean she was doing the lion’s share of the childcare? "I don’t really want to talk about it, but you can’t do everything you want to do."

It turns out she wanted to do a lot. There is the painting, the memoir, an essay collection called Is It My Body? and occasional acting gigs. Echoing her ability to walk on both sides of the street musically, she’s appeared in art movies (Boarding Gate, I’m Not There, Last Days) and hit TV shows with "girl" in the title (Gossip Girl, Gilmore Girls, Girls). Does she feel compelled to stay busy? She shrugs. "One has to make money. That’s the main reason I did the book. I never thought I’d write a memoir, but people were asking me."

One thing she didn’t intend to do was form a new band, but she started recording improvisations on cassette and sharing them with her friend Bill Nace and one thing led to another. Body/Head released their debut album, Coming Apart, last year. "I didn’t want to do anything I had to promote," she says, laughing. "I mainly wanted to concentrate on doing art, but I do like performing."

I wonder if after 30 years of being "Kim Gordon from Sonic Youth" she’s working out who she is now. "Oh yeah, for sure. Your whole identity depends on it. You definitely have to refigure out who you are. But it’s also kind of exciting to be… not in freefall, but not knowing exactly what’s going to happen. There are times when you lose your narrative or get tired of it. Then it takes a while to figure out what the new one is."

It echoes something she said earlier when I asked how she felt onstage with Body/Head when an improvisation was going well. "It feels like you’re going through some place and you’re bringing the audience with you. You’re not really sure where you’re going, but it doesn’t matter." Then she fondly remembered the 1991 tour with a pre-fame Nirvana. "No one really knew who they were in Europe and every night it would be a completely different set, with Kurt throwing himself into the crowd. It was always exciting because you didn’t know what was going to happen. There’s something to be gained when things fall apart."

Is It My Body? Selected Texts is published by Sternberg Press (sternberg-press.com). Body/Head’s album, Coming Apart, is out now on Matador Records