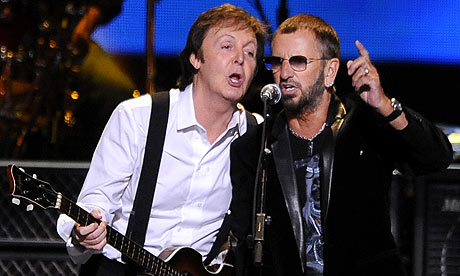 Sir Paul McCartney was joined on stage by Ringo Starr at 2014’s Grammys, for the Beatles‘ long awaited reunion.

After months of speculation, the pair shared the stage in their first public performance in over three years for a rendition of McCartney’s single Queenie Eye, taken from his last album New. Performing in front of the audience at the Staples Centre in Los Angeles, McCartney was seated at a psychedelic piano with Starr on the drums.

The Beatles, who won Best New Artist at the show in 1965, were presented with 2014’s Recording Academy Lifetime Achievement Award by Julia Roberts, while McCartney flew the flag for the Brits at this year’s Grammys, winning Best Music Film for concert movie Live Kisses and Best Rock Song with Cut Me Some Slack, his collaboration with Dave Grohl, Krist Novoselic and Pat Smear from the Sound City – Real to Reel soundtrack. To date, McCartney has won 16 Grammys, taking 10 with the Beatles, four as a solo act and two with Wings.

Their performance at tonight’s show follows rumours that TV producers were courting Paul McCartney and Ringo Starr for a musical reunion at New York’s Ed Sullivan Theatre. To pay tribute to the event, Annie Lennox and Dave Stewart will also reunite the Eurythmics for the first time in almost a decade. The duo are expected to cover one of their Fab Four favourites alongside performances by Maroon 5, Alicia Keys and John Legend.