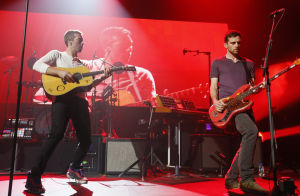 Coldplay’s Chris Martin, left, and Guy Berryman perform at the iTunes Festival during the SXSW Music Festival on Tuesday, March 11, 2014, in Austin, Texas.

AUSTIN — As the South by Southwest Music Conference begins, there’s almost a feeling that it has some catching up to do.

The buzz out of Austin has been loud for a week, like an epic party that your friends attended without you, thanks to the success of SXSW’s interactive and movie branches. Wide-ranging sessions and speakers — astrophysicist Dr. Neil deGrasse Tyson, ESPN brainiac Nate Silver, teleconferences with WikiLeaks founder Julian Assange and NSA leaker Edward Snowden — have made huge headlines.

But the festival is deeply rooted in music, and the bands have officially plugged in. Though the big names dominate, the bulk of the acts are up-and-comers from across the globe. They’re looking for a break. And probably tacos and free beer.

For the attendees, the name of the game is access, and that has taken an interesting twist for the more high-profile events. Samsung Galaxy sponsors a Wednesday night show featuring rap stars Jay-Z and Kanye West. Festivalgoers had to hope to be picked in a drawing to get passes to the concert, but Samsung Galaxy owners earned early access. The Austin American-Statesman reported that 500 to 600 Galaxy owners were in a line that wrapped around two streets on Tuesday when the passes were distributed.

A drawing format is also in play for the iTunes Festival, which started on Tuesday with Coldplay at ACL Live at the Moody Theater. The rest of the event includes Soundgarden, Pitbull, Imagine Dragons, Keith Urban and Willie Nelson over the next several nights.

Leave it to Lady Gaga to top all stunts. Her Thursday night show is at the Doritos #BoldStage (a.k.a. Stubb’s every other day), and access will be granted to a sampling of those who take on a "bold mission."

The actual execution of that isn’t quite so elaborate. Per instructions from SXSW volunteers at the Austin Convention Center, it amounted to tweeting "the boldest thing you’ve ever done" to be entered into a drawing for passes.

Thankfully, the same "bold" requirements won’t be in play for her Friday morning appearance, when the meek and the cowardly can watch her give the keynote address.

Sean "Diddy" Combs was the main attraction during Wednesday’s conferences at the convention center. The rap mogul’s interview session was peppered with encouraging words for aspiring artists and entrepreneurs. Much of it centered on his latest effort, Revolt TV, a music-video channel that reaches 22.8 million homes, according to Bloomberg. The business site reports that Combs has put in a $200 million bid to buy the Fuse channel as well.

"I saw a wide-open lane to kind of create the CNN of music, the ESPN of music," Combs said of Revolt. "To follow our artists that we love, in such a journalistic and passionate way that ESPN follows Kobe or LeBron or Serena. That’s the same way we’ll follow everybody, from Chance the Rapper to Jay-Z to me."

Combs is easy to root for in these candid moments. He was full of self-deprecating humor, and poked fun at his rap-name adventures (Puffy, Puff Daddy, P. Diddy) along with some of the antics on his old reality show Making the Band. At one point, he stopped to admit he wasn’t terribly comfortable speaking in front of a crowd.

"I’m nervous up here," he said, "so the louder that y’all clap, it makes me not nervous."

The crowd applauded a lot after that.

The SXSW experience includes fun for foodies as well, with food trucks gathered at the South by South Bites area near the convention center. An undeniable highlight is The AnchorVan, a food truck promoting the DVD/Blu-ray release of Anchorman 2: The Legend Continues. There you can get a toy microphone and a fake tattoo of a Ron Burgundy mustache. The main attraction: "Whammy Chicken," just like David Koechner’s character Champ Kind serves in the movie — except it’s really chicken, and not bat. (That sentence doesn’t make much sense if you haven’t seen the movie.) You only get one chicken tender, but still. Whammy.