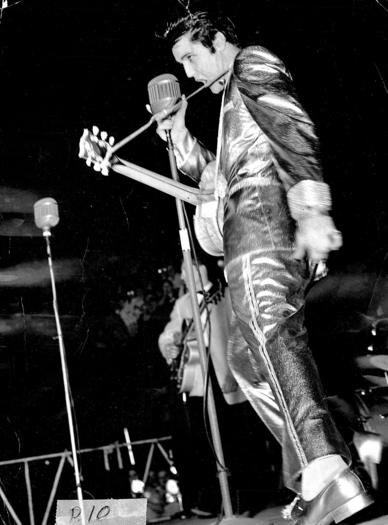 When Miley Cyrus struts, dances or twerks onto the Allstate Arena stage Friday, thousands of kids will scream their approval and not a few parents will wish their children had picked a more age-appropriate music idol.

Every few years another music star bursts on the scene to enthrall the next generation and appall the old. But even as that bright young thing shocks anew, the very thought that her predecessor was equally risque, cutting edge or dangerous provokes polite laughter — or open mocking.

But the scene Friday will be remarkably reminiscent — down to the outrage evoked by the star’s pelvic prowess — of another young musical act, nearly 60 years ago.

Elvis Presley’s rise was meteoric, going from high school graduation in 1953 to national singing sensation by January 1956 when "Heartbreak Hotel" was released and he appeared on his first network television broadcast, Tommy and Jimmy Dorsey’s "Stage Show."

While Presley’s first reference in the Tribune was in the TV listings for "Stage Show," his inaugural editorial mention was May 1, 1956, in the Tower Ticker gossip column, then penned by Herb Lyon, who wasn’t a fan.

"Listen! There’s just gotta be a rational explanation for the incredible ‘cultural’ turns in modern music. What mass madness brings on a rock ‘n’ roll craze and catapults an Elvis Presley to six months of immortality?" Lyon protested, before adding, "(Watch, it won’t be any longer.)"

To be fair to Lyon, he wasn’t alone in scoffing at the "erstwhile hillbilly balladeer from Tennessee." While the teens loved him, the press saw "nothing but a male burlesque dancer," the Tribune reported. Reviewers didn’t like his style, they didn’t like his music and they didn’t like his performances, which were described as "the grunt and groan school, chopping one-syllable words into incoherent multisyllables exhaled in gasps."

Of course, the bad press had no effect on his stardom. "Heartbreak Hotel" went gold in less than three months. "Elvis Presley," his first album, sold like hot cakes in March. He appeared on Milton Berle’s show in June, when his wiggling hips while performing "Hound Dog" were called obscene. A June 27, 1956, story joked that Presley would be unable to sing for a few days because he threw his hip out. Appearances on "The Steve Allen Show" and "The Ed Sullivan Show" followed that summer and fall. His first movie, "Love Me Tender," came out in November 1956. Simply put, Elvis was "the most."

Then he came to Chicago. For Tribune readers, the big news broke March 17 in Tower Ticker, where Lyon clearly recognized Presley’s star power even as he didn’t stop sniping at him. Presley announced that he would open a short seven-city tour by shaking up the International Amphitheatre on March 28, 1957.

The event was front-page news in the Tribune under the headline, "Elvis Rolls and 12,000 Teen-Age Fans Rock."

"Elvis Presley put on his golden slippers last night, cuddled his guitar, gyrated, and turned the International Amphitheatre into a shrieking mass of 12,000 teen-age fans," wrote reporter Louise Hutchinson. The story focused on the manic fans, including a girl who "swung her purse at a policeman, missed him and clouted an usher." So hard, apparently, that he went to the hospital. "It was like a tribal rite, and Presley was the high chieftain."

Tickets were $2 to $3.50. One fan spent an additional $13 for a "low-cut, fur trimmed, and clinging" dress in hopes of improving her chance of meeting him.

The scene was bedlam: "At one point a teen-age girl clung to the stage with both hands and shrieked," the Tribune reported. "It took two policemen to pull her away."

But the kids weren’t the only people moved by Elvis. "A mother, seated with her three children, reached out and touched Presley. Tears of joy rolled down her face," the Trib said.

As remarkable as Presley’s rise to superstardom was his staying power. When he returned to Chicago in June 1972 for three shows over two days at Chicago Stadium, the response was just as fanatical. Consider, though, how much happened in that 15-year span. Rock ‘n’ roll grew up. The Beatles came and went. The 1960s, with all their political, social and cultural upheaval, changed America profoundly. But not so much that Elvis wasn’t still the king.

The fans were older, the Tribune noted, but the screams were just as loud. Elvis had traded his gold-leaf suit for his now-famous high-collared, sequined white jumpsuit, with its plunging-to-the-navel neckline. Tribune writer Michael Sneed, who wrote a first-person account of the concert, noted Elvis’ slight paunch and tired eyes but reveled in the Presley presence nonetheless.

"Thousands of females left their spouses at home to catch one last moment of time when life was a Friday night date," she wrote. "They had to come to the right place. Elvis Presley had come to call and it was great."

Editor’s note: Thanks to Mike Rossetti, of Willowbrook, for suggesting this Flashback.