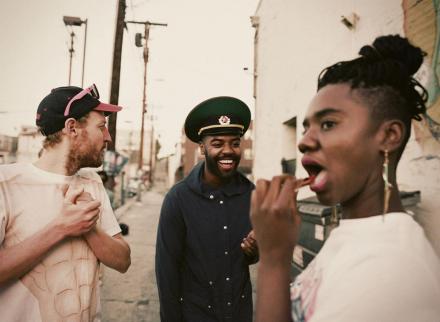 Travis shares music that is being produced now, but is reminiscent of the sounds from the ’90s, including one group that’s reviving Snoop Dogg.

Music From The Segment

OK. Time now for the HERE AND NOW DJ Sessions.

HOBSON: Travis Holcombe is a DJ at KCRW in Santa Monica, California, and he’s back with us. Hi, Travis.

HOBSON: Hey. So let’s start with some new music featuring someone that a lot of people who grew up in the ’90s will definitely recognize. Let’s listen.

HOBSON: Travis, that is, of course, Snoop Dogg, or Snoop Lion. Or what is he calling himself now?

HOLCOMBE: He’s calling himself Snoopzilla for this project.

HOBSON: And we remember that in 2012, he had kind of a re-awakening, disavowed gangster rap, said he was a Rastafarian and was turning to reggae. Where does this fall into his evolution?

HOLCOMBE: Yeah. I think that was sort of a short-lived phase, because I actually saw him at a concert. It was like literally maybe two or three months after he made that proclamation, and he was still playing all the hits that you would expect him to play. I mean, I kind of feel like he’s at the point now in his career where he’s never going to top what he did early on with "Doggystyle," as far as in the gangster rap genre. So, you know, he’s kind of branching out and trying different things and just keeping his name out there, basically.

HOBSON: And he already of course tried out acting in the movie "Soul Plane," but we’ll leave that for another show. This – in this, he’s part of this group called 7 Days of Funk. Here is another song by them. This is "Faden Away."

(SOUNDBITE OF SONG, "FADEN AWAY")

HOBSON: Travis, tell us about 7 Days of Funk.

HOLCOMBE: So, 7 Days of Funk is a project that Snoop is doing in collaboration with an indie producer based out of L.A. here called Dam-Funk. And it sort of got – it’s not a straight-up rap record. It’s more of a hybrid rap-’80s-electro-boogie-funk kind of thing. And if anyone is familiar with Snoop’s song "Sensual Seduction," it’s sort of more stuff kind of along those lines. And it’s – you know, the sound is heavily indebted to the synthy-electro-boogie-funk sound of the ’80s, sort of like the post-disco, pre-electro funkadelic sound made famous by, you know, Parliament Funkadelic, Slave and even Prince.

And, you know, Snoop is never going to be – no one’s going to confuse Snoop for one of the great crooners of our time, but he’s got enough charisma. And his flow is very smooth, and it still comes out that, you know, he can get away with it, because he’s Snoop Dogg, or Snoopzilla.

(SOUNDBITE OF SONG, "FADEN AWAY")

SNOOP DOGG: (Rapping) Girl, you got me faden away, faden away. Make time, make love, that’s what we make, looking nowadays, looking like it’s gonna fade. See me, will you see here G soul, if he lose, baby, he gonna gain another dough. What a brother know, keep it on the low. That’s what my grandma said it’s supposed to go. Feel the same, we toast and post, and if it all works out, then we Casper the ghost.

HOBSON: You also wanted us to listen to a group called Oddience. This is a trio from Koreatown in Los Angeles. Let’s listen to their song "Pre Noon 24oz Tall Can" from their debut album, "Um, Yes You Can."

HOBSON: Tell us about Oddience, Travis.

HOLCOMBE: So, Oddience is a group that a friend of mine hipped me to about a year and a half ago. They have a track called "Smile." And the first time I heard it, I just immediately fell in love with Oddience, and was just following everything that they were doing.

ODDIENCE: (Singing) Can I talk to you, speak your mind for you? Got my mind in my mouth. I got the best for you. Many things rot your brain. I got the meds for you. Mr. Class on class, got a word for the mass (unintelligible) . Simple is as simple does, and everything’s cool. In a couple milliseconds, I’mma hop in the pool. It’s a no-brainer. No, I’m nobody’s fool, yo. You could kill it if you want. Homie, it’s cool. I got another…

HOLCOMBE: Really good. I mean, they really – two of the people on the group are Eddington and Miche. They’re brother and sister. But they both rap and sing, and they have such awesome voices. And they have, like, a knack for melody that I just love.

HOBSON: And both this and what we were listening to from 7 Days of Funk do bring us into the throwback jams category. What is it about the ’90s, or things inspired by the ’90s that’s catching your ear right now? Because not just you. The ’90s are showing up in all kinds of dance clubs around the country, now, I guess to try to get the 20 and 30-somethings in the door.

HOLCOMBE: I mean, you know, it’s inevitable that everything is going to come back at some point. So maybe, you know, now that we’re 20-plus years removed, that it’s time for the ’90s resurgence.

HOBSON: Well, one more we’ve got here from you, and this is not about the ’90s. This is sort of a ’50s throwback. This is Nick Waterhouse. Let’s hear from his new album, the song "This is a Game."

(SOUNDBITE OF SONG, "THIS IS A GAME")

NICK WATERHOUSE: (Singing) Well, this is a game, always it wasn’t so. Well, before we get started, there’s one thing about it that you should know. This is a game. Please remember my words and don’t get upset when you don’t get what you think you deserve.

HOLCOMBE: So, Nick Waterhouse, he’s like – he’s a name that a lot of people aren’t familiar with, but they probably – there’s a good chance that they have heard his music, because it’s been licensed a lot for different TV commercials. But this is his second album. It’s called "Holly." It’s put out by a label called Innovative Leisure, based out of Los Angeles. And, you know, as you’ve heard, it’s got a very 1950s-R&B-early-rock-and-roll kind of feel. It sounds like something that could have been recorded in Sun Studio in Memphis in 1958.

He stays very true to that sound. Like, there’s no weird synths or anything that are – like that – that are going to pop up. He’s very much like a traditionalist, I guess, in that sense.

HOBSON: Well, from many decades, a lot of great music for us. Yet again, Travis Holcombe, DJ from KCRW in Santa Monica, California, thanks as always, Travis.

HOBSON: I just love this music right here. And this is "Ain’t There Something Money Can’t Buy," also by Nick Waterhouse.

(SOUNDBITE OF SONG, "AIN’T THERE SOMETHING MONEY CAN’T BUY")

HOBSON: And, Robin, as always, we have all of the songs listed at hereandnow.org. From NPR and WBUR Boston, I’m Jeremy Hobson.