B.J. Novak on ‘One More Thing’

B.J. Novak on ‘One More Thing’ 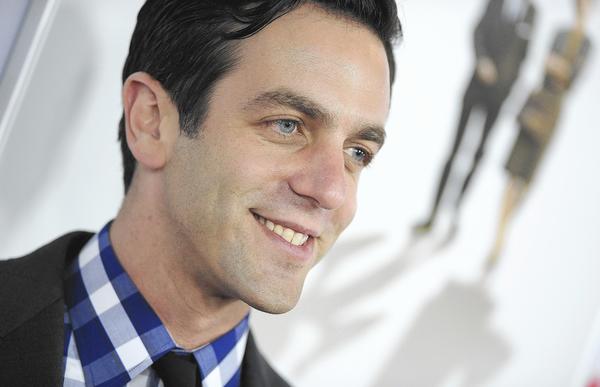 After eight years of serving as writer and co-executive producer of NBC’s "The Office," B.J. Novak — who also played Ryan Howard on the show alongside Steve Carell and John Krasinski — is flexing his creative muscles. In addition to acting in movies, including the recent "Saving Mr. Banks" and the upcoming "The Amazing Spider-Man 2," Novak recently published "One More Thing: Stories and Other Stories," a collection of short fiction, monologues and other snippets from his work as a standup comic.

This piece first ran in Printers Row Journal, delivered to Printers Row members with the Sunday Chicago Tribune and by digital edition via email. Click here to learn about joining Printers Row.

The pieces in "One More Thing" are simultaneously funny and brainy, usually taking far-fetched "what-if" scenarios to their logical, if often outlandish, conclusions. They reinvestigate old fables — as in "The Rematch," in which we’re treated to a second race between the tortoise and the hare — or send up pop culture conventions, as in "The Comedy Central Roast of Nelson Mandela," which is as raucously "out there" as its title suggests. Printers Row Journal caught up with Novak, 34, for a phone interview from his home in Los Angeles; here’s an edited transcript of our chat.

A: Actually writing has always been the main thing for me, the thing that everything else has progressed from, including acting in "The Office." Writing has always been my home base, and I’m always looking for different forums to do it in, whether it’s just online, or writing for film and TV, or humor pieces or short stories. To me, it always starts with the idea. Writing is what I wake up every day to do; I always go to bed thinking of what I’m going to write. And acting is a break from writing. Anytime anybody calls and says, "Would you be interested in being in a movie?" I always say, "Yes, yes, please," because it’s an incredible vacation from writing. But it’s just natural that people are more known for acting, which is why some people are surprised to see me writing.

Q: In fact you wrote several episodes of "The Office," and I read somewhere that you wrote most of these pieces while you were doing the show.

A: Well, I had a lot of ideas working on the show, but it was a full-time writing job for eight years, so I was kind of burned out from putting every idea into the world of "The Office." And after that was over, I looked at all the ideas that had never gotten a chance to breathe and thought of all the other ideas that would probably come if I’d let them. And so I thought, why not write a book? It wasn’t even a book at first; it was sort of a collection. I called it "Uncollected Stories" and performed it as a live theater show. But what if I just didn’t limit myself and just wrote every idea I had, of whatever length, and saw what happened? I wanted to have as much variety and freedom as possible after being cooped up in a fluorescent-lit paper company for eight years.

Q: But the writing you did for the show and the writing in the book are not completely different things, are they? They come from the same place.

A: It comes from the same place tonally, and it has the same values. What I learned on "The Office" was to care about every character immensely, even someone who might seem arrogant or a buffoon. The trick was to care about them and let the comedy come naturally. It might be very dramatic in one moment and then very funny, but it was all the same world. And that was important to me in writing this book, that it not simply be joke-joke-joke or drama-drama-drama. Everything kind of hit this zone that’s hopefully intelligent and accessible and funny, all at the same time. That was the tone that I thought was good about "The Office" and that I wanted to bring to my writing in the book. But in terms of specifics, I think they’re quite different, because so many of these stories are about impossible situations, whereas "The Office" was about finding the beauty in the mundane.

Q: You said before that it’s all about the idea. A lot of fiction writers would say it’s about the story or the characters; in my experience of interviewing writers, very few would say, or admit, that it’s about "the idea."

A: You know, I was in this film "Saving Mr. Banks," playing one of the Sherman brothers, who wrote the famous songs in "Mary Poppins." And I asked Richard Sherman, "Did you write the music first or the lyrics first?" And he said, "We always started with the idea." And in some ways I wanted to write stories that were like that, like a song. So yeah, I start with the idea; in fact, one of the stories is called "Just an Idea." And in many cases, the characters in the stories are the encapsulation of an idea.

Q: Let’s talk about the idea of "The Rematch," in which you reimagine the fable of the tortoise and the hare.

A: Since I was a kid, I’ve always been bothered by the story of the tortoise and the hare. I thought, "That’s very unfair. That’s selective memory." I mean, perhaps there was one time that a tortoise beat a hare in a race, but when you look at the story, it’s an impossibly extreme scenario. In general, a hare would beat a tortoise, and it’s really missing the point to focus on the one time it didn’t happen. There’s no lesson to be drawn from that. And so when I started the book, I thought, "If I’ve always been bothered by it, imagine how the hare must have been!" He probably felt terrible. So I wanted to imagine what would happen if they raced again, and there was some emotion that came with that. And actually, although I start with the idea, I cut all the ones that don’t lead to something more meaningful. To me, that was a story about regret, and what it’s like to know you messed up.

A: Sure. Every thought that goes into any competition, I wanted to put into the story. I wanted to look at the other side of the story, not the pleasant, fairy-tale lesson — the turmoil that goes on inside a person when they have one chance to settle a score publicly.

Q: Then there’s "No One Goes to Heaven to See Dan Fogelberg," in which a new resident of heaven realizes that his grandmother is sort of putting him off in favor of going to concerts by her favorite musicians.

A: In one way, that story is about being a performer. You know, I perform standup comedy all the time, and I’ll go to some college in Minnesota, and there’ll be a thousand people there, and I feel like the greatest performer alive. I think I’m good, but I know that if Richard Pryor were performing next door, let alone Mark Twain, let alone Elvis Presley, there would not be a soul in that theater. I’m a star of circumstance; we all are. And so it would be very hard to be a performer in heaven. Almost no one would get any audience. That was kind of sad — and funny — for me on a personal level. And then that expanded to include family — about how your grandparents, who dote on you so much in your childhood, how much you are a star of circumstance to them. If Frank Sinatra or Elvis Presley were available to them every night, perhaps they’d be less interested in that 9-year-old boy.

Q: You grew up in family with roots in comedy. Your dad, William Novak, the ghost writer of memoirs by Lee Iacocca and Nancy Reagan, co-edited "The Big Book of Jewish Humor," and you would have absorbed some of that.

A: Absolutely. Comedy was really the language of our dinner table. And by the way, my dad also writes private biographies of families; he did one for the Pritzker family in Chicago.

Q: How would you define Jewish humor?

A: I would define it as humor that has both a logic and a wistful irony. Any joke that has those two elements to it seems to me to come out of the tradition of Jewish humor. And I’d say that Jewish humor is somewhat central to Jewish identity, at least the one that I know. But I also think that the Jewish sense of humor is pretty close to the American sense of humor. "Seinfeld," "Curb Your Enthusiasm" — those really resonate as an American form of humor. I grew up thinking of it as Jewish humor, but at this point it’s become so much the humor of America that it’s hard to know where it starts and stops.

Q: I’m guessing that you are a reader of The New Yorker "Shouts & Murmurs" column.

Q: There’s a simpatico between that column and the writing you do in the book.

A: Thank you. In fact one of the pieces in the book, "The Man Who Invented the Calendar," was in that column a few months ago. I was intimidated by that page for a long time, because I felt it was the only mainstream outlet for comedy writing that I could name. And I thought, "A lot of my comedy voice isn’t in this style," and a lot of my ideas didn’t seem to fit there because they’re more dramatic, or more philosophical or abstract, or way too long or too short. But once I let myself begin writing in my own voice, there were several of the pieces that were fitting for a "Shouts & Murmurs" column.

Q: One piece in the book, "The Comedy Central Roast of Nelson Mandela," felt a bit risky. To what extent did you feel like you were on thin ice there?

A: I hope that people won’t mistake it for something offensive. If they do, that’s their right, and I’ll understand. But for me, that piece was about sending up and exploring the culture of roasts. There’s this whole tradition that is, I hate to say, very funny, but also troubling, because it’s much easier to tell a killer joke than to lead a killer life. And yet, on these roasts, a killer joke is what prevails. And I laugh at it and feel uncomfortable about that. So I wanted to explore the idea: What would be going too far for a roast? Who could you roast in that scenario, and what would happen? And I couldn’t think of anyone with more dignity, that it would be a worse idea to roast, than Mandela, the ultimate person who was above this. And then I thought, these are good comedians — what would they say? And what would Mandela say? He’s been through much more adversity than a joke from Sarah Silverman. How would he rise above this?

Q: Now that "The Office" is over, in addition to the writing, you’re doing more movies, including the new "Spider-Man" film, set to open on May 4.

A: Yes, I have a role in that. I play an employee at Oscorp who is very antagonistic to Jamie Foxx’s character.

Q: And does your character have super powers?

A: My character’s name is Alistair Smythe. I work at Oscorp.

Q: If you had a serial number, maybe you’d give me that.

A: I could give you one digit.

Novak will appear Monday at UP Comedy Club (upcomedyclub.com) and Tuesday at Unabridged Bookstore (unabridgedbookstore.com).