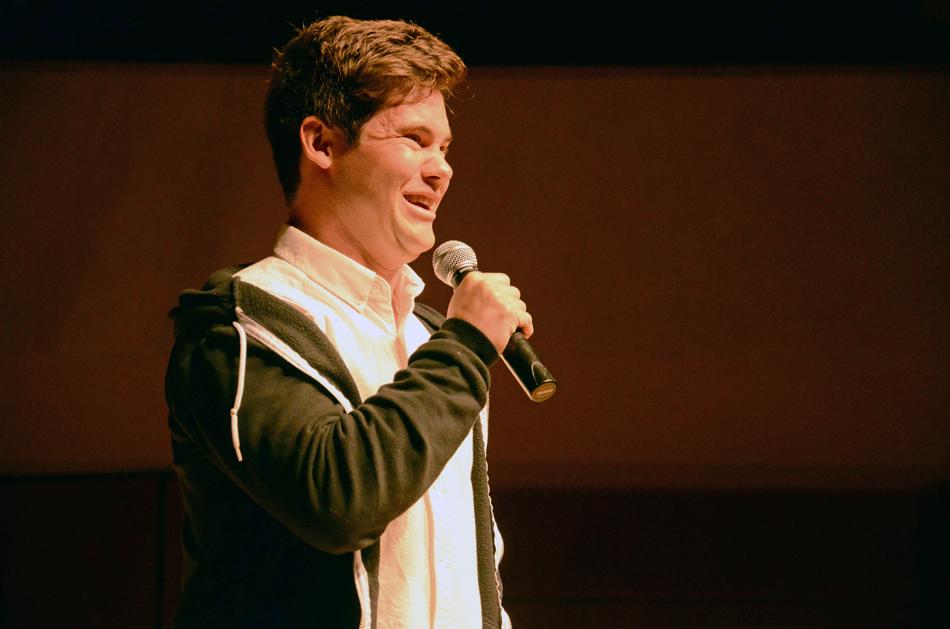 DeVine works as an actor and writer and is well known for the Comedy Central show “Workaholics," for which he writes and stars in. He was also featured in the musical comedy “Pitch Perfect.”

As A&O Productions’ spring speaker, DeVine shared jokes about his personal life and his TV show, while also interacting with the audience.

“I think the reason I’m single is that every time I go to go on a date, some girl is like, ‘So like what do you want to do? You want to go to dinner or the movies?’” he said. “I’m like f–k that, froyo. Let’s do this.”

Following his routine, DeVine held a question-and-answer session with the audience. Bienen and Communication sophomore Daniel Stromfeld asked if his a cappella group, Thunk, could perform with DeVine because Stromfeld said it was his birthday. Stromfeld ended up performing alone with DeVine and the duo sang a rendition of “Lights” by Journey.

“I was shaking the entire time,” Stromfeld told The Daily after the event. “I wish he knew a Michael Buble song, but we came up with that Journey song that we both know. So that was pretty cool. It was pretty surreal. I’m definitely crossing one thing off my bucket list: singing with Adam DeVine.”

DeVine was also asked to share advice for aspiring actors.

“Move to L.A., and hopefully you get lucky and work really hard,” he said. “I just made a bunch of Internet videos with my friends, and somebody at Comedy Central was like, ‘These guys are good.’”

Prior to DeVine’s set, Communication junior Alex Heller and Communication senior Mike Schultz performed their own stand-up routines. Heller shared her cost-effective alternatives to the common activities of her sorority sisters, including memberships at Evanston Athletic Club, eating lunch at Whole Foods and studying abroad.

Weinberg junior Merve Ciplak said she attended the event because she is a fan of “Pitch Perfect.”

“I didn’t know his comedic side, but it was awesome,” she said. “He was hilarious. He’s not cocky. He’s down to earth.”

“I thought that was a lot of really great energy in the room from people who were familiar with his inside jokes from ‘Workaholics’ and just kind of fed off his energy really well,” the Weinberg senior said. “So that familiarity played really nicely into his routine, and because of that there was a lot of spontaneity and engagement with the audience, more so than usual.”