Clip from the nation’s only true Rock Orchestra. John Luebke’s Rockestra was video taped at the Orpheum Theatre in Sioux City, Iowa. For concert info see their website. www.siouxcityrockestra.com 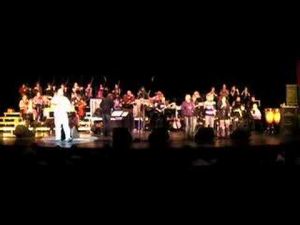 Taylor will also perform songs by Boston, The Guess Who, REO Speedwagon, Sly and Family Stone, Pat Benatar and Robert Palmer, as well as the Elton John medley that was performed at the rock orchestra’s first concert in 2004.

SIOUX CITY | In the last concert of its 10th season, the Sioux City Rockestra promises a night jam-packed with music and memories from the past.

The rockin’ celebration begins 8 p.m. Saturday at the Orpheum Theatre.

“We are pulling out all the stops to make this concert one for the ages,” Luebke said. “And, to make it a true anniversary concert, almost every song will be a former audience favorite and will be pulled from our library vaults.”

A special feature of the show will be a reunion of the Conchords, a band from western Pennsylvania who won regional acclaim in the late 1960s, Luebke said. He was the keyboardist of the band, replacing one of the members who moved away during high school.

All these years later they’re reuniting.

“Guitarist Bill Bailey is coming from Maine, drummer Ron Nash is flying in from Virginia, and singer Phil Hutchinson is traveling from the group’s hometown in Pennsylvania,” Luebke said. “What a thrill to have these guys here.”

Luebke will take his place at the keyboard once again joined by his son Michael on bass.

The Conchords will be performing a song by the Byrds with Rockestra accompaniment before breaking into “On Broadway.”

Luebke added that this group of Conchords is not the one seen on TV. “We are much more fun,” he said.

While his former bandmates scattered across the East Coast, Luebke eventually made the move to the Midwest and founded Sioux City’s Rockestra in 2004.

The 40-piece rock ‘n’ roll orchestra – complete with strings, brass, woodwinds, a rhythm section and vocalists – attracted a following that quickly outgrew its original performance space in Morningside College’s Eppley Auditorium and the venue at the Castle on the Hill.

For the anniversary show, Rockestra welcomes back singers Pat Tomoson and Jackie Schmillen and violinist Ilisja Moreland, who will perform “El Tango de Roxanne” from the movie “Moulin Rouge.”

Moreland, an Albania native, graduated from Morningside College and moved to Rapid City, S.D., to pursue work as an attorney. Schmillen used to work at KPTH before making the jump to co-host KCWI’s morning show, “Great Day,” in Des Moines.

Tomoson, another alumnus of the group, remains in the area. He was with Rockestra for five years, starting at a very basic level.

“I remember dragging in a couple of speakers for the first gig,” he said. “It was pretty rudimentary. I saw a ton of potential there … I knew it could go places if it was done right.”

A decade later, he won’t have to lug around equipment like a groupie. He’s returned to find a makeup of musicians humming along like a fined-tuned machine.

And boy, do they know how to put on a show.

Even in the early stages, Tomoson reached a height of recognition that rivaled local celebrity status.

“You run into people that saw you at Rockestra, you’re almost like a rock star. I’m just some knucklehead living locally,” he said with a laugh. “I knew once we sold out the Orpheum it was a big deal. Almost every show there was something different, something new.

“Going back to it, it feels good.”

Copyright 2014 Sioux City Journal. All rights reserved. This material may not be published, broadcast, rewritten or redistributed.