Quentin Tarantino Gets the Cabaret Treatment

Quentin Tarantino Gets the Cabaret Treatment

WEST HOLLYWOOD, CALIF. — In a new musical revue, song-and-dance numbers are punctuated by the pop, pop, pop of gunfire, a body is shot in a trunk before the shooter hits his high note and a man in a uniform recites a monologue about stolen watches hidden in body crevices.

Quentin Tarantino, the film director whose oeuvre inspired the spectacle, has no connection to the production but was in the audience on the show’s second night, leaning into a booth with friends. He said afterward that he was embarrassed for the first few minutes of the show. By the second act he was singing along and waving his hands in the air as a cast member belted out "Across 110th Street," featured in the director’s 1997 "Jackie Brown."

Other toe-tapping scenes included a Nazi searching for Jews—to the tune of "I Gotcha" by Joe Tex—and the famous bride-assassin from "Kill Bill Vol. 1" crooning "Bang Bang (My Baby Shot Me Down)" in a white wedding dress.

"One thing that really hit me was how well it worked as a musical," Mr. Tarantino said. 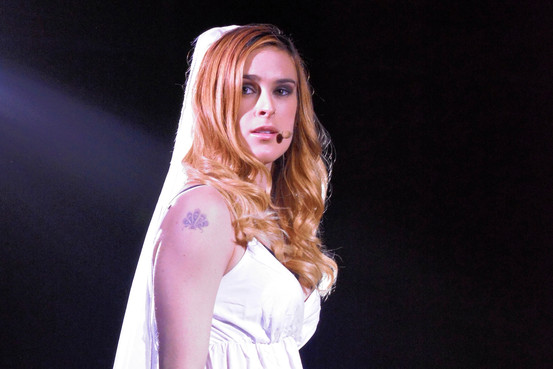 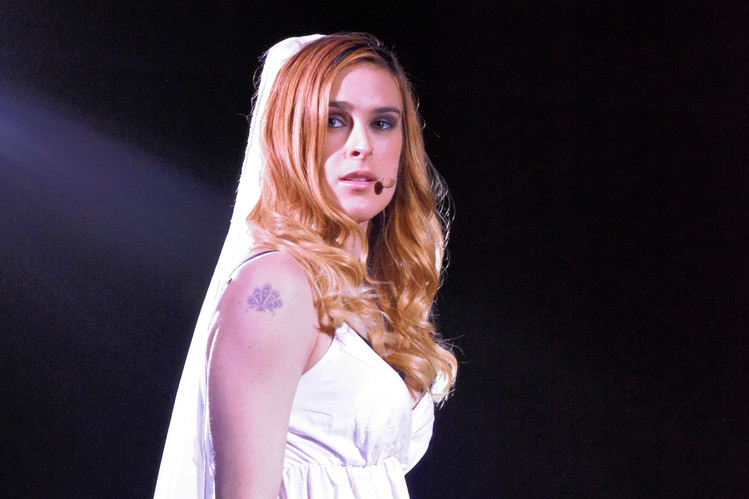 "For the Record: Tarantino" represents the latest twist on a recent trend in live entertainment: movies getting the musical treatment on stages from Broadway’s Winter Garden Theatre to Los Angeles’s St. Monica Catholic High School. While films such "The Bridges of Madison County," "Rocky," and "Footloose" have been adapted as straightforward narratives with musical interludes, "For the Record: Tarantino" mixes things up. "Pulp Fiction," "Inglourious Basterds" and even "Django Unchained" turn into a mashup of dancing gunmen and soprano strippers. The show is more sadistic than most musical fare (notwithstanding "Sweeney Todd") and much more violent.

The For the Record troupe’s previous work has included homages to subjects like Baz Luhrmann, director of song-and-dance-heavy "Moulin Rouge" and "Strictly Ballroom." Even its Martin Scorsese revue, "For the Record: Scorsese in Concert," included some more redemptive moments.

"Scorsese’s violence is more realistic but not as graphic," said Shane Scheel, the group’s co-creator. "Quentin is so in your face with it, but it’s done with a wink and a smile."

It was Mr. Tarantino’s use of music on his soundtracks that nearly four years ago inspired Mr. Scheel, a booking agent for comedians at the time, and a partner to begin showcasing local TV and film talent singing songs from Quentin Tarantino movies at a small dinner theater in the Los Feliz neighborhood of Los Angeles.

Tracie Thoms, who starred in Mr. Tarantino’s 2007 movie "Death Proof," was in the cast during that first production and, on Mr. Scheel’s suggestion, began one night reciting some of the dialogue from Mr. Tarantino’s films before breaking into song. Now that the group is reviving the Tarantino show in a larger 250-seat nightclub in West Hollywood, it has created a much more nuanced production filled with choreographed sword and knife fights and a mashup of dialogue. It also added scenes from Mr. Tarantino’s newest film, "Django Unchained," to the mix.

For now the group has been operating as a cabaret, which gives them more leeway in performing well-known works, said Mr. Scheel. But he says he is trying to work out rights issues and other logistics to organize a director-inspired show—perhaps "Tarantino"—that can play in New York or travel.

On the evening that Mr. Tarantino was in attendance, actress Lindsey Gort, who plays the young Samantha Jones on the television show "The Carrie Diaries," was the "Kill Bill" bride—at one point sword-fighting with actress Janel Parrish from television’s "Pretty Little Liars." Rumer Willis, an actress and the daughter of Demi Moore and "Pulp Fiction" star Bruce Willis, is also in the rotating cast. She was off the clock on the evening Mr. Tarantino dropped by, and boogied along with her mother in the booth next to his. (Mr. Willis stopped by a few nights later.)

In one scene pulled from "Reservoir Dogs," a cop was shackled to a chair by another criminal who cut off A piece of his right ear. Together they sang "Stuck in the Middle with You," with the kidnapped man harmonizing at one point through a duct tape gag. Embellishing a scene from "Jackie Brown," a criminal shoots a guy in the trunk of a car before singing the Delfonics’ "Didn’t I (Blow Your Mind This Time)."

The revue, scheduled to run in West Hollywood through May and at the Montreal Jazz Festival in June, has turned Mr. Tarantino into an unlikely idol for the musical-theater crowd. The rowdy audience erupted into cheers when it spotted the director at the performance. When he was directing movies like "Kill Bill," where the only choreography is in its gruesome sword fights, Mr. Tarantino never envisioned his movies in cabaret form. He said he wasn’t opposed to filming a straight musical in the future.

Write to Alexandra Berzon at and Erich Schwartzel at