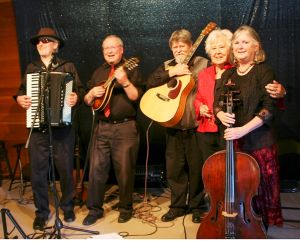 Mama mia! Feet were tapping last Sunday afternoon to the Hot Frittatas unique blend of Italian and French Café style music at the White Barn, with proceeds going to benefit Rianda House. The combination of accordion, mandolin, guitar and cello inspired visions of gondolas drifting down Venetian canals and a picnic table under a shady vineyard tree with a bottle of red wine.

The Frittatas rendition of “O Solo Mio” was a snappier version than the Dean Martin standard, and a tarantella set to the theme from the TV show “Leave it to Beaver” was a crowd-pleaser. The finale, the theme from “The Godfather” came with a story: The band was hired to play at Francis Ford Coppola’s birthday party at his winery in Geyserville. The group had hopes of getting Coppola’s attention, perhaps for his next “Godfather” movie. As it turned out, it was pouring rain the entire day, and Coppola was not in the best of moods. Maybe next time.

The Hot Frittata’s style of music grew out of 19th Century Italian popular dance music, Strauss waltzes and polkas that evolved into urban Italian tarantellas and pizzicas, or folk dances.

“A lot of it is based on dance music,” said Gus Garelick, on mandolin and violin, and the group’s music arranger. The band is rounded out by Dennis Hadley on accordion, Don Coffin on guitar and Gail Sharpsteen on cello.

Influences on the band’s music are Italian, French, Brazilian, Bluegrass and Klezmer all melted together into a unique Italian-American mixture of styles. Hence the appropriateness of their name. A frittata is an egg dish with the ingredients all mixed up together. Turns out the word is often used in Sicily as a term meaning crazy, all mixed up, like a frittata.

As fun as their music is, the band’s virtuosity is attested to by rave reviews of their two CD’s, “Invitation to the Dance”, and “Café Liscio”.

“It’s a lot of fun to play and watch people tapping their toes,” Sharpsteen said.

Proceeds from the performance, like all performances at the White Barn, go to a nonprofit, this time Rianda House. Mike Hardy, chairman of the board, attended the performance and commented on how much the senior’s activity center has grown.

“A couple of years ago nobody knew what it was. Now, over 1,000 people a month come through our doors,” Hardy said.

Hardy also noted that the center is working towards a couple of goals; to expand their reach through the Upper Valley, especially Calistoga, and to extend more outreach to the Hispanic community.

To hear a sample of the Hot Frittatas music, go to hotfrittatas.com/appearances.

Copyright 2014 Napa Valley Register. All rights reserved. This material may not be published, broadcast, rewritten or redistributed.